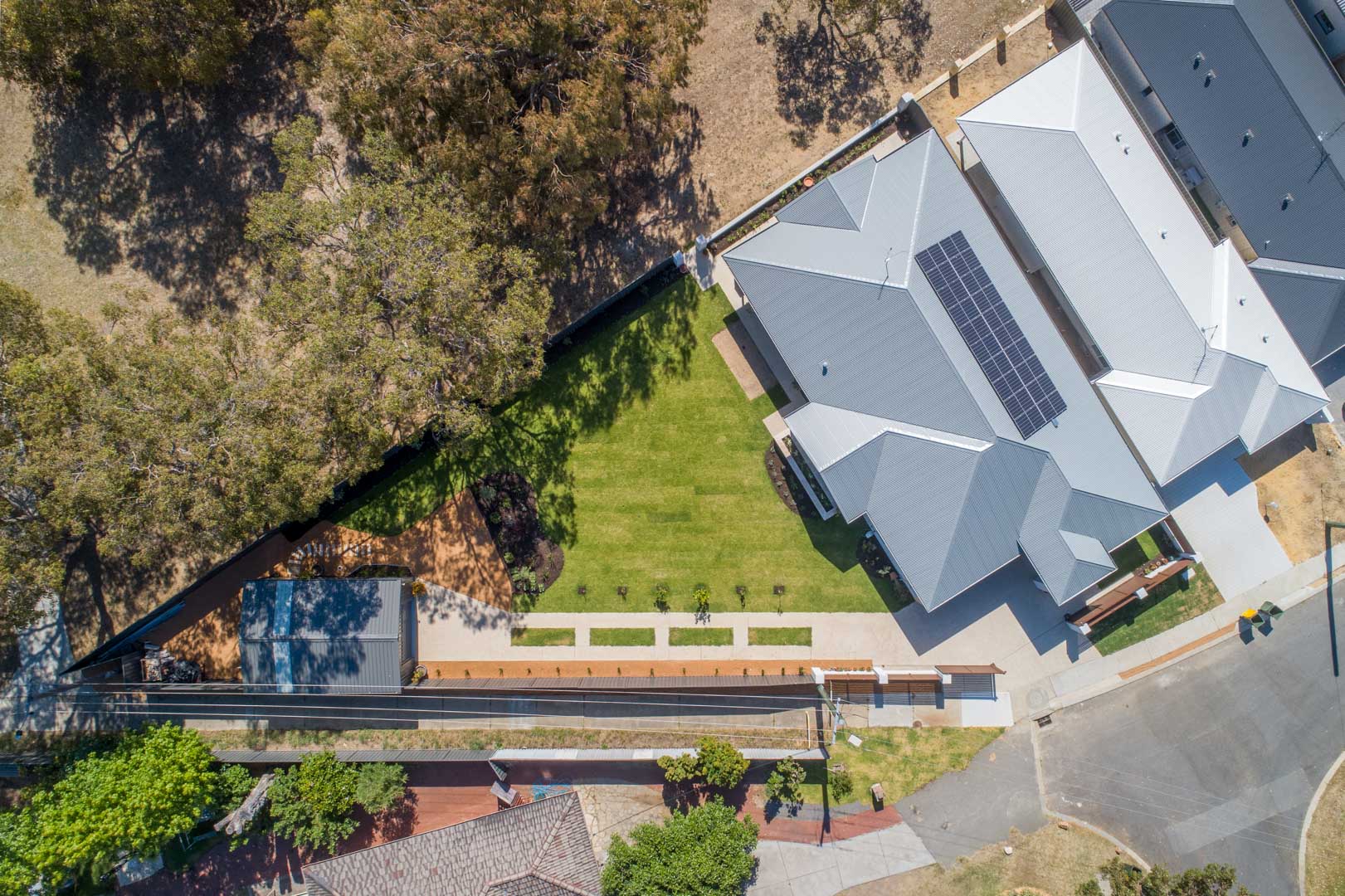 We decided to go with Ismart as our Passive House Builder because of Brian’s experience,
knowledge and passion to build sustainable and good quality homes.
From the outset, we wanted to build a certified Passive House Plus and considering Brian has built
many certified Passive House projects in the past, it gave us the confidence to build with Ismart. We
wanted our forever home to be built with integrity and quality and this was achieved by the whole
team.
We needed a bespoke builder that we could trust and rely on throughout the build and that’s what
we got. Our supervisor was on-site daily and was very accommodating with our requests. The
tradesmen working for Ismart care about the quality of work they do and everything was completed
to a high standard. Everyone in the Ismart team were all friendly and approachable.
We will be recommending Ismart to all of our friends, family and work colleagues. We hope
everyone has the same positive experience we did. 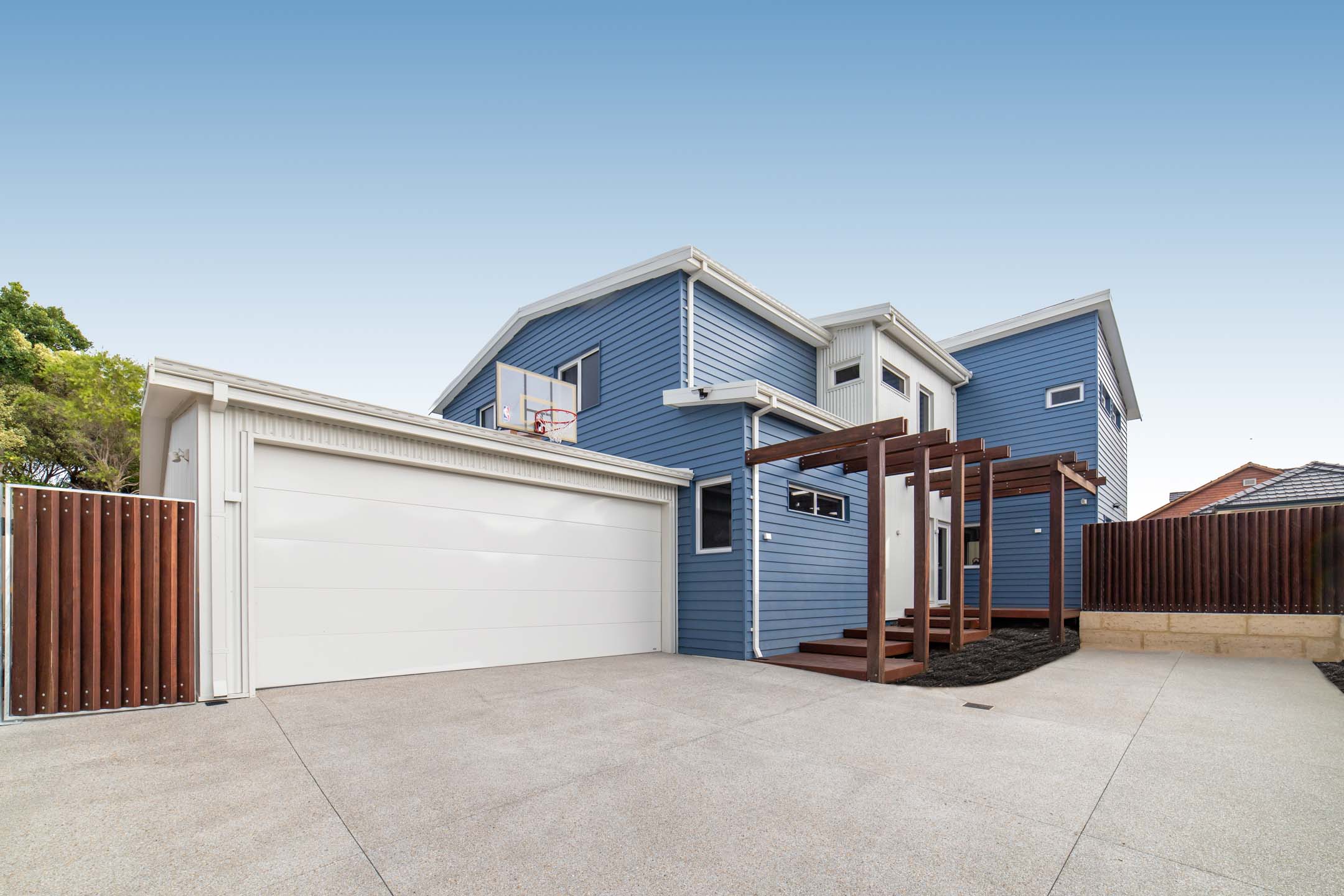 We first met iSmart at the Perth Home Show.  At the time, we weren’t exactly looking for
PassiveHaus standards, but we knew we wanted our new build to have many of the
features iSmart were offering such as timber frames, high energy efficiency, and pre-
fabrication.  So we decided to get a quote for our design.

Their costing estimate came back very competitive to conventional construction for a
product that is technologically superior, and we decided to go ahead.  We had been
promised a quick turnaround, but were still very impressed to be able to move into our new
house only 8 months after the concrete slab had been poured! Even more impressive
considering they surprised us achieving certified PassiveHaus standards!  We have been
in the house for almost 4 months now, and we couldn’t be happier.

Throughout the process, iSmart’s team was fully conversant on the technical details of
their wall system and the overall thermal performance of buildings.  They were always
approachable, and their responses were consistently timely.

As in any home build project, there were a few hiccups along the way, but through it all,
Brian and his team have been fully accountable for their part of the deal and issues have
always been resolved to our satisfaction.  So, to us, it only comes down to the question of
whether we would build with iSmart again, and the answer is yes, absolutely!

The ISmart team is an excellent group to work with. We built two other homes with project builders
(one in NSW and another in WA) but the commitment to quality and engagement with our build
shown by the ISmart team far surpasses these project builders. Brian and Dennis took time out to
review our block of land before we purchased it and were then involved in all aspects of the
development of design by the Luke Kellett team. We received sagely advice and thoughtful
problems-solving along each stage of the building journey. Communications were always respectful
and clear, with a careful eye to the budget to ensure that we kept within agreed parameters. The
quality of workmanship was high as was the general level of inclusions. All team members were
open to our questions about the most mundane or naïve items. We were always able to work
through any unclear areas with the minimum of fuss. We love living in our Certified Passive home.
The personal, conscientious, and knowledgeable support we received from Brian and Dennis

throughout all stages provided an excellent foundation for building our beautiful new home. Sincere
thanks to all the guys including: Matt, Julian Trevor, Paul and others. We recommend ISmart
unreservedly. 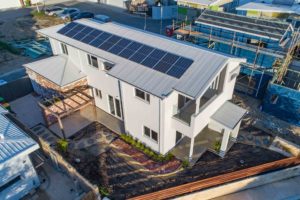 My research into energy efficient building lead me to the passivhaus approach. I then set
out to find a builder with experience with the passivhaus approach in Perth to learn more
about how it worked here.  I am very glad I found the team at Ismart because their
knowledge and experience was obvious.  A couple of months later I found my block and the
planning really began. Brian and Dennis from Ismart worked hard in the design phase with
Luke from Kellett Design Group to make my dreams take shape.  They helped guide my
ideas, came up with better ones and helped to keep me to a budget. The build phase was
quick, there were fortnightly onsite meetings with Brian and Matt and great communication
in between which meant my build was a fun and exciting experience.  The result is a
fabulous home that exceeded my expectations.  It was built by a team passionate about
building energy efficient and healthy homes. And I get the feeling they really enjoy
delivering the dream to their client.  Mission accomplished! Thanks Ismart!
Fiona Beeck 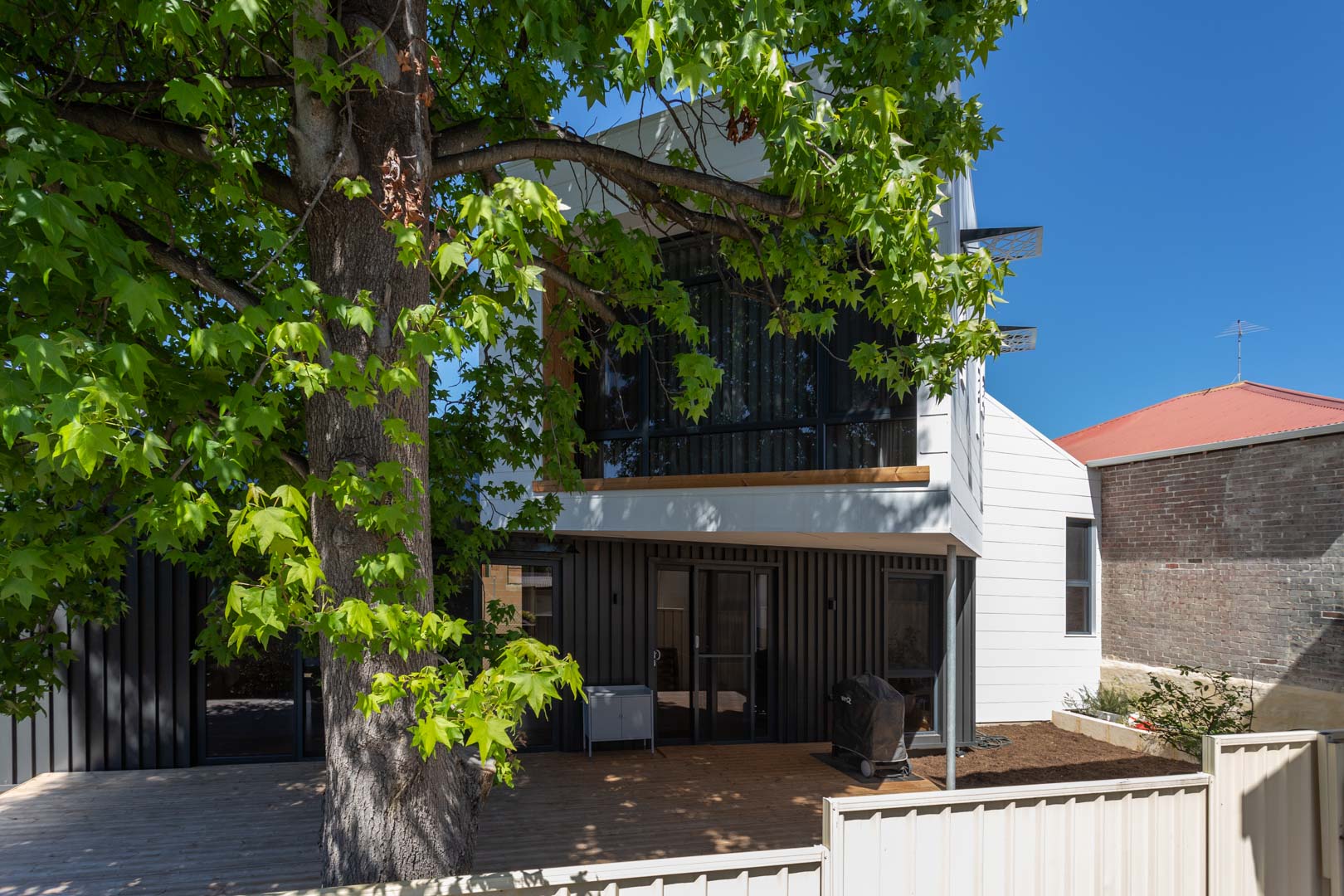 When we first met Brian, we were immediately struck by his professionalism, positive approach,
problem solving and his attention to detail. Over the course of the build all of these attributes
helped make the building process go smoothly. Brian was happy to address our constant questions
and always ensured we were up to date with the progress of the build. He was ably assisted with a
very professional group of staff and contractors who were polite, friendly and considerate. We have
been more than satisfied with the quality of the build, and Brian and the team have turned our
Architect’s visions into a reality that has exceeded our expectations. The team at ISmart have built
an extension for us that is functional, sustainable and stylish. It is a testament to Brian and his team
that, while many friends and acquaintances shared stories of difficult builds, we were able to say
that our build was a very smooth, efficient one. It has been an absolute pleasure working with Brian
and his fantastic team and we do not hesitate to recommend them to anyone looking for a builder
with a passion for quality and sustainability. 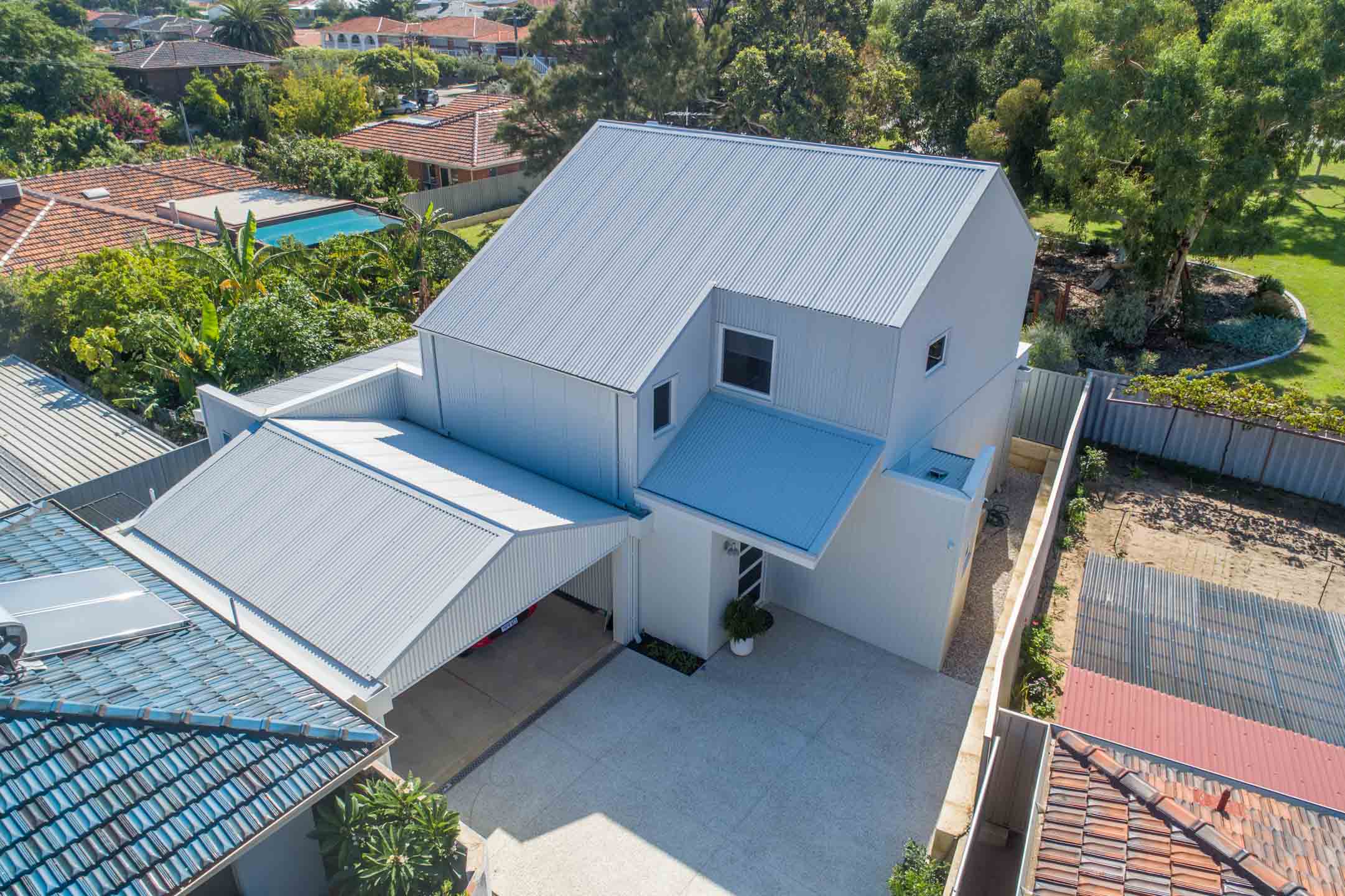 One of the best parts of journey to building our home was finding ISMART Building Group . The
company’s principles ( and passion! ), in particular the Heat Recovery Ventilation System and the use
of Timber frame were what we’d been searching for . As we journeyed through the process
the experience was to reveal further principles – a group with integrity and honesty ,committed and
hard-working team members . As a result , the entire process was 99%  stress-free , our home was
built beautifully and efficiently with excellent communication channels – so important for a client
and builder relationship to work.

2018 Winner of the Architects Institute of Australia. “Sustainable Architecture Award”

We decided to move closer to Fremantle and purchased a block in White Gum Valley. Our
next challenge was to meet the guidelines expected of us in respect of building an energy
efficient, sustainable home. We sought the expertise of architect Michelle Blakeley and she
designed the home we wanted. After some research we settled on the iSmart system and
Emerald Building Solutions as our builder.
From day one, we were able to watch our new home proceeding from earthworks to
completion – which was done in about eight months. We have never been in any doubt we
made the right decision. Designed with the German concept of Passivhaus in mind, our home
is comfortable, beautifully designed and built with care and attention to detail. The
culmination was the Sustainable Architecture Award from the Australian Institute of
Architects. Our home is comfortable all-year round and requires little help to make it so.
When the temperature tops 34 degrees, we switch on a split system air conditioner for a
couple of hours, the power paid for by our 5.6kw solar PV system. The special air circulation
system installed by EBS, combined with double glazing and top quality insulation, works
beautifully and keeps the indoor temperature around 23 degrees most of the time.
We cannot offer a higher recommendation than Emerald Building Solutions. Brian Guinan is
a gentleman, extremely knowledgeable, a stickler for quality and a wonderful builder. Even
after 12 months people still stop and admire our home. 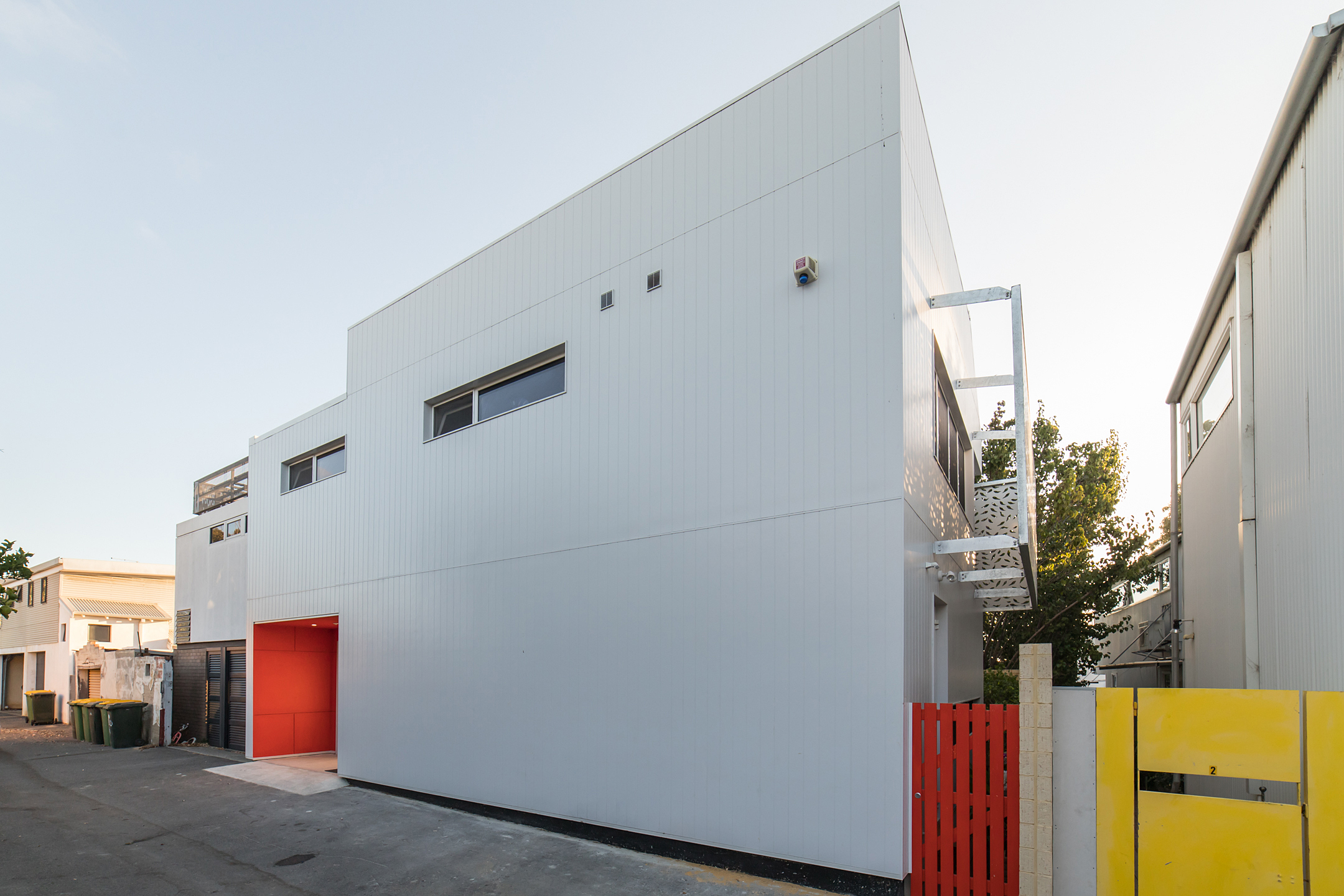 I can highly recommend I-SMART Building Group. Brian and his team did an excellent job to build my
new home on a very small,  challenging, intercity block with limited access. I have been living in my
beautiful new house for a couple of years now and so glad I chose to build a Passiv Hous.  It is a very
comfortable home to live in, it has such an even temperature all the time. Definitely a good
decision.